Paintings from the “Malaysia Cycle”

Brixy's early imagery plumbs depths and origins. Symbolic in content and pictorial in art. Human being is at the centre of the painter's interest. Essential are: the primal matter of "water", chance encounters, twisted and trodden paths of life. The penetration into and emergence from deep soul worlds and a variable thicket of formal structures dominate the canvases. The power of this pictorial language is fed by the concentration on the essential. 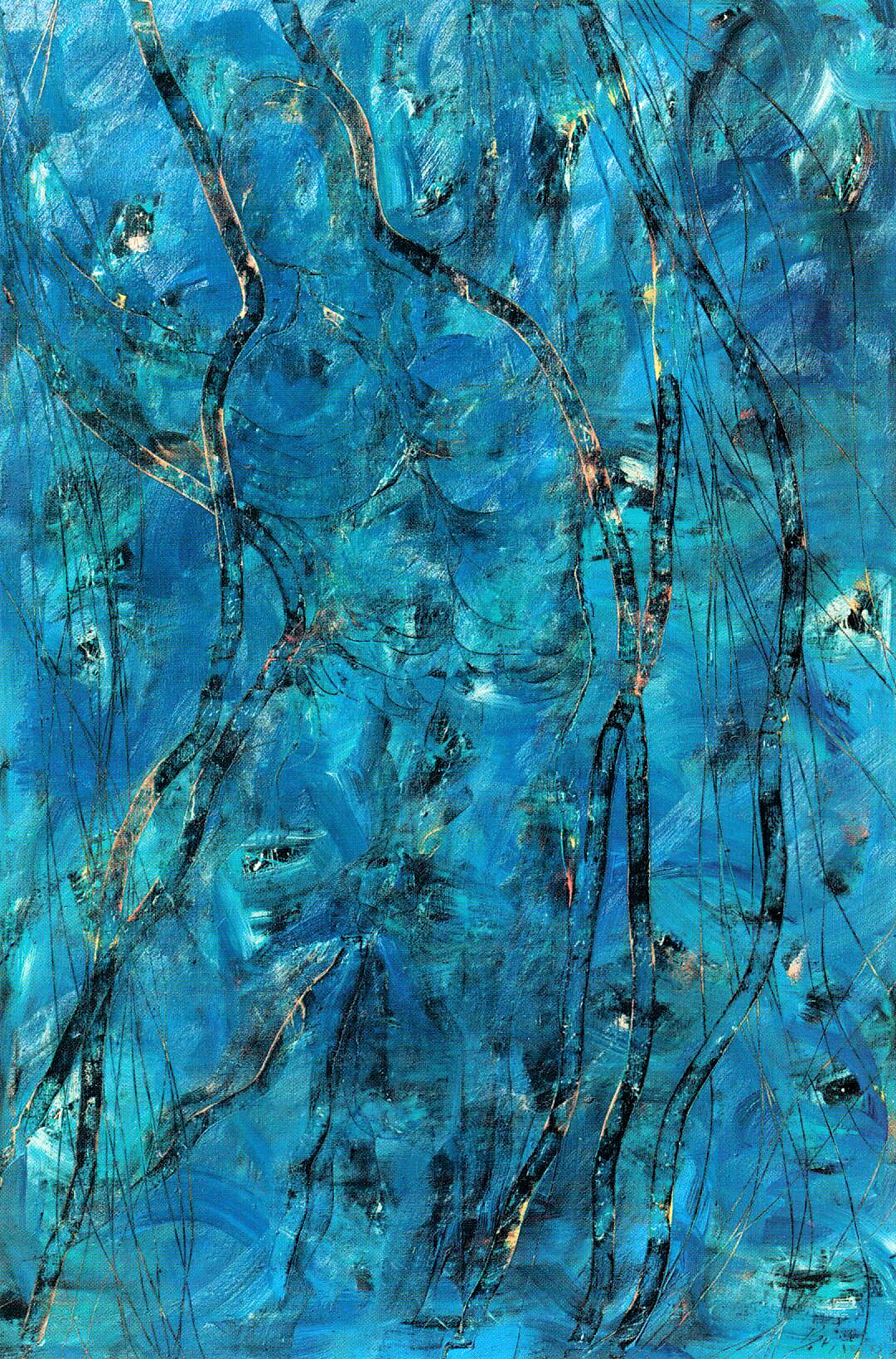 by Christel Heybrock (from the catalogue of the same)

It seems to be a fundamental human need to see mirrors in the things around us in which we can recognise something of ourselves. In archaic cultures it goes so far that man becomes tributary: to the sun, to the animal gods, to a sacred mountain or tree. This expresses the realisation that man is dependent on the earth and is shaped by its conditions, not vice versa.

When looking at the pictures from Dietmar Brixy's "Malaysia Cycle", one suddenly becomes aware of what occidental civilisation notoriously ignores, namely those correspondences between man and nature that reach down into the depths. There is indeed the term "soul landscape", but isn't its use already somewhat disreputable and doesn't it denote the pictures of all too romantic, world-escape painters who, in their spunness, only ever look inwards and flee from trials of preservation in reality?

Dietmar Brixy's pictures prove again and again how foolish this suspicion is and that the real tests of endurance lie precisely in the inner work - in processing what one has encountered. Happiness and disappointments, loneliness and experiences of life and fullness want to be absorbed in equal measure and understood as an impetus for growth, and so key motifs for such processes could already be found in Brixy's work: for example, the ladder as an image of progression, but also of the connection between two sides, or the snail shell as a sign of a place of protection and encapsulation that made new growth possible from within.

Now, then, the "Malaysia Cycle", born out of the experience of a landscape whose abundance and density are overwhelming. In its complexity and impenetrability, the Southeast Asian jungle actually became the landscape of the soul, whereby Brixy by no means meant only his own, but was able to see the personal concern in a supra-personal, generally human perspective. 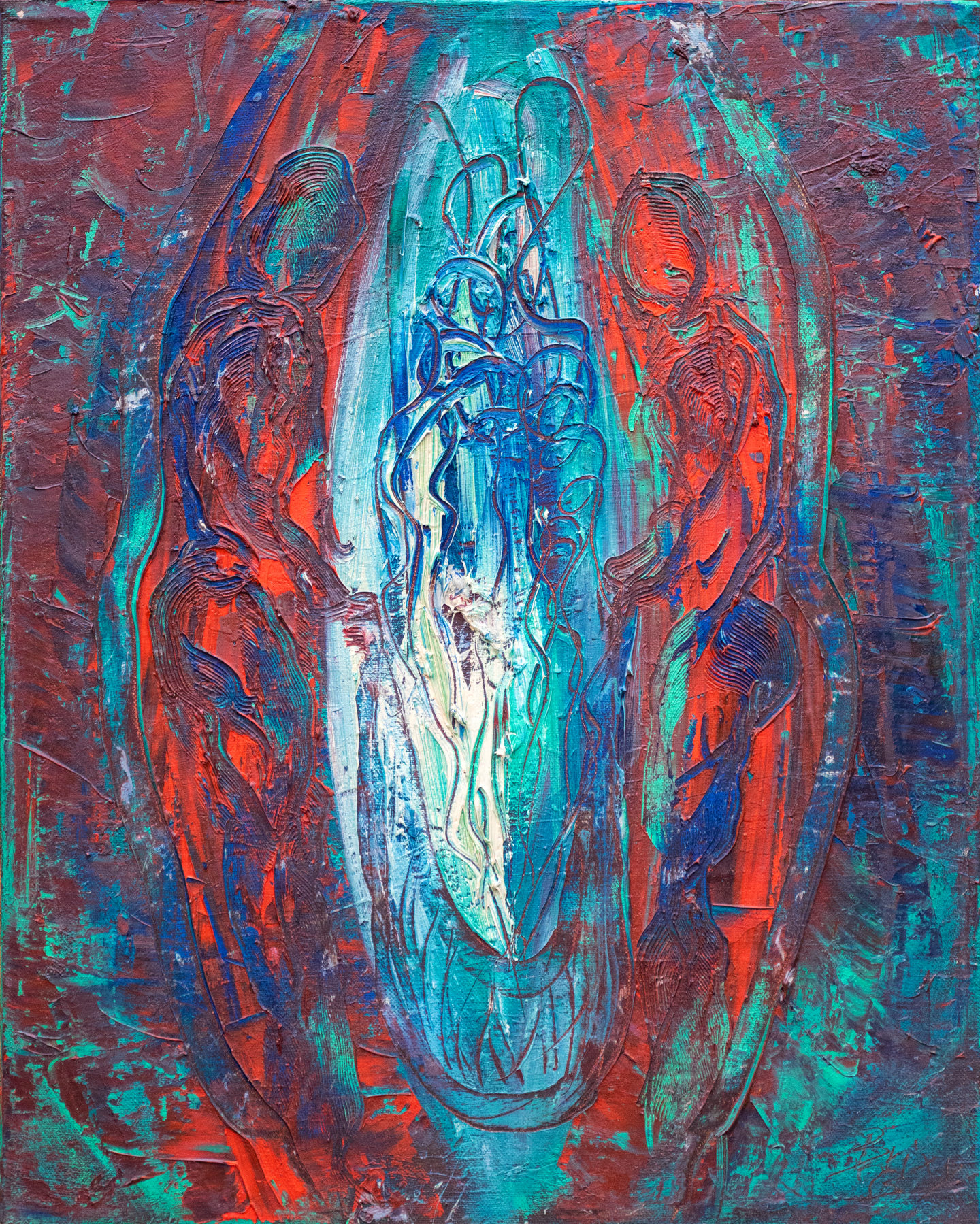 The pictures are not easy to receive, especially not quickly.

The jewel-like luminous surface with its sometimes almost painfully intense colours wants to be penetrated in order to be recognisable as the result of a growth process from the deepest to the uppermost layer of paint: the jungle and its laws of vegetation from the swampy ground to palm branches and luminous blossoms found a surprisingly appropriate correspondence in Brixy's painting method of superimposed layers of paint.

Entering the "Malaysia cycle" means entering an outer and inner jungle. What seems to be given at first glance changes during the viewing, as if one could take steps with the eyes. Almost all the paintings in the cycle seem closed at first, often dominated by the predominance of a single colour on top. These are, for example, blue in the "Swimmer", yellow-green in the "Jungle Rush" or an aubergine tone mixed from red and white in the picture "Crouching". Those who are content to recognise these colours and enjoy them see nothing.

Only after a longer pause, perhaps favoured by a change in the daylight, does the eye work out structures and deeper layers that gradually emerge so intensely that they almost make the dominant surface colour disappear. The impression is then the opposite of the one at the beginning: the surface seems to be pushed into the background and the depth is in the foreground; the structures of form prove to be powerful and penetrating after having hardly appeared at first. Analogously, what can the gaze grasp when one goes into the jungle on a boat, as Brixy did? The gaze grasps clouds of green and only later, near the arduous progress, trunks, aerial roots, lianas, leaf veins, in other words the structures and the dark ground of evolved forms. 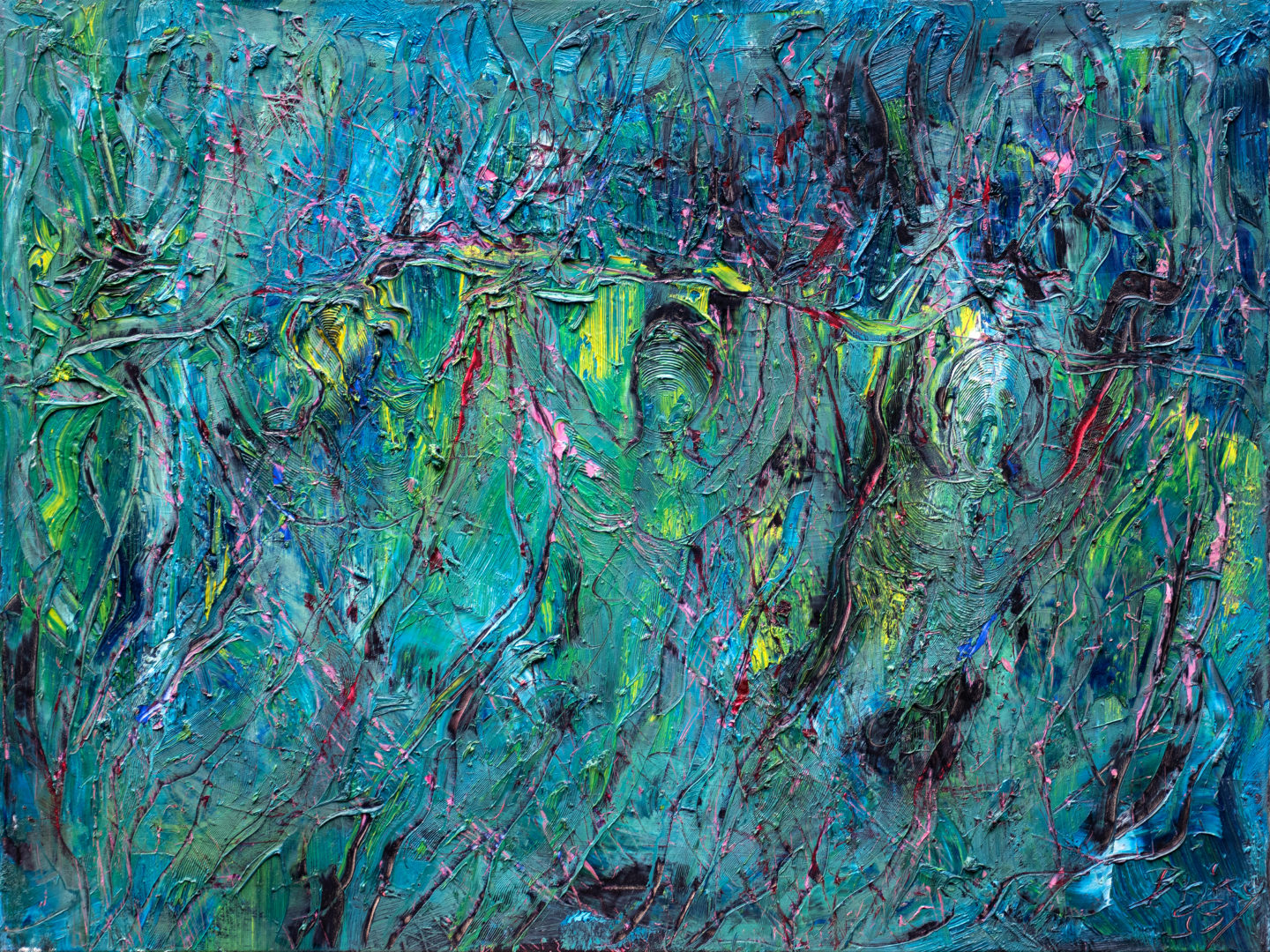 On top of the primer of the canvas lies a usually very bright colour, for example red. Except for remnants, this layer is covered by other colours, and often a complementary colour lies at the very top. Depending on the rhythmic needs of the painting, Brixy now scratches the lower layers free again and draws fine, feathery parallels into the surface with a comb, giving it something light, wafting, breathing. Thus, a signal-like red may emerge from beneath a fierce blue, which proves to be weightless during viewing and is in any case the colour of depth and absorption, or a picture that appears entirely in a light, spring-like yellow-green becomes increasingly darker, warmer and at the same time more threatening.

The jungle as a landscape of the soul? Are these landscape views in the conventional sense that Brixy painted with the "Malaysia Cycle"? Of course not. What is meant is the outside as well as the inside. The painter only became increasingly aware of the inner fullness, the threatening wild growth of fears and forces in the human soul, when he saw the outer jungle. A painting like ,,Tiefenrausch" reproduces the situation of diving. The real snorkel-diving already seems to take on an undreamed-of glamour when Brixy only reports on this experience, which is new to him - unconsciously, he seems to have discovered a primal action, a process of almost ritual significance for himself with it. Diving below the surface, the cautious exploration of hidden connections, wasn't that already part of his abilities before? 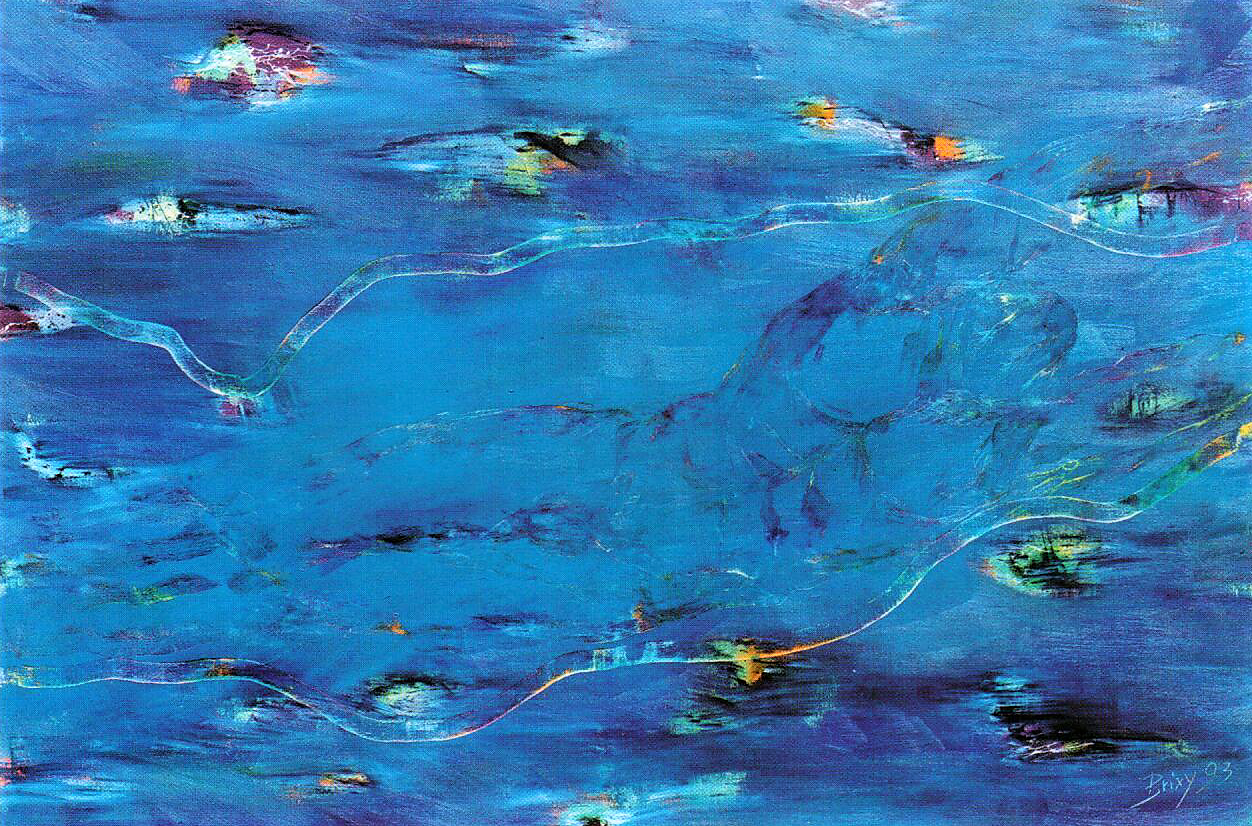 And now this picture. A blue you only know from dreams.

At first sight, one doubts that it can be endured for a long time, because in an almost painful way it is increased by spots in red/orange. One should stay with these spots for a while and then scan the blue again. The red/orange, those actually burdensome, albeit vital colours in the depths, is always accompanied by a lighter white, sometimes in delicate streaks, or a light green-yellow or darkness up to black. So many colours, which were hardly recognisable at first, begin to create a coherence, a wave movement of water from flashing light reflections and darkness.

Or does this flickering and sloshing, this aimless but ever more precisely recognisable change, this constant exchange, possibly take place in the depths of the water? At the bottom? Outside and inside, depth and surface are one in Brixy's work, they are subject to a delicate exchange just like the crests of the waves that become the trough of a wave and glitter up again and back into the shadows?

So in the middle of the blue there are structures. Two transparent serpentine lines form like umbilical cords in which a liquid pulsates. Or umbilical cords like the tentacles of underwater creatures? From a purely evolutionary point of view, humans also originate from the water habitat, which can still be inferred from their prenatal stage. It is not too much to say that Brixy, diving, painting, sounding out depths and origins, penetrates to the conditions of an existence not yet divided into body here and soul there.

An infinitely cautiously suggested human figure can be elicited from the painting "Tiefenrausch" in the middle between the two umbilical cords that create an open, mandala-like oval. Head and arms, chest, belly and legs are the result of thin flickering and gentle little shadows, nothing else.

What is this picture?

Self-portrait of the snorkel diver Brixy? Certainly. The image of a complete integration of man into the water habitat? No doubt. Or is it the symbolic representation of a human being who, in exploring the depths of his soul, dives down to the id, to the innermost part of his person, to that washed-over and invisible continent that connects all human beings?

The questions are wrong, because there is no 'or' in Brixy, there are only correspondences. The sloshing of the water is at the same time an exchange of meanings. The red that emerges from the depths, the glitter and the darkness, they not only give form and structure to an unstructured substance like water, but also to the unstructured, potentially chaotic element that man finds in his own depths. There, something that cannot be named shines, flashes and sinks just as it does on the surface of that element water that man carries in his history and in his body.

In Malaysia, in the midst of a foreign outside world, Brixy has opened up a foreign inside world that is just as primeval and primeval as the forest. Even more: he has painted his discoveries. They are pictures of a travelling explorer. 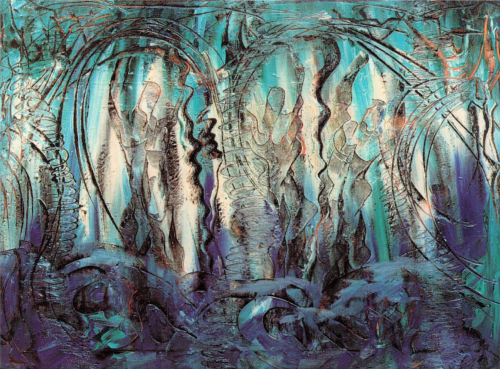 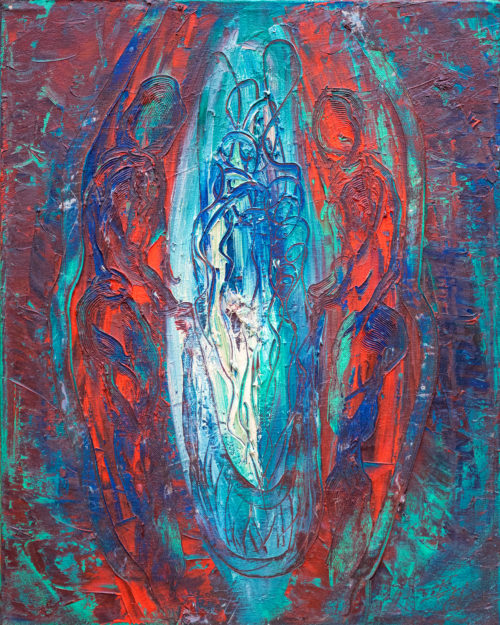 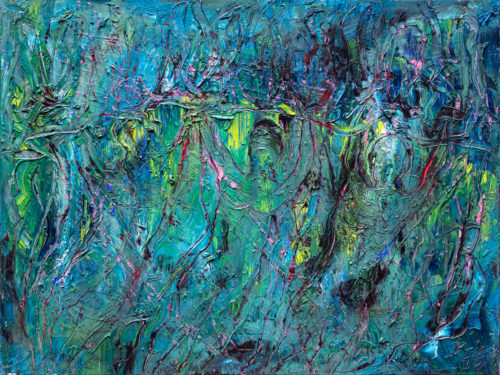 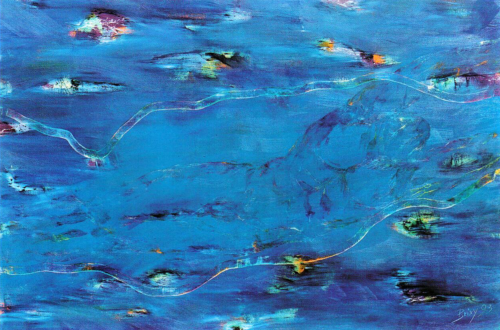 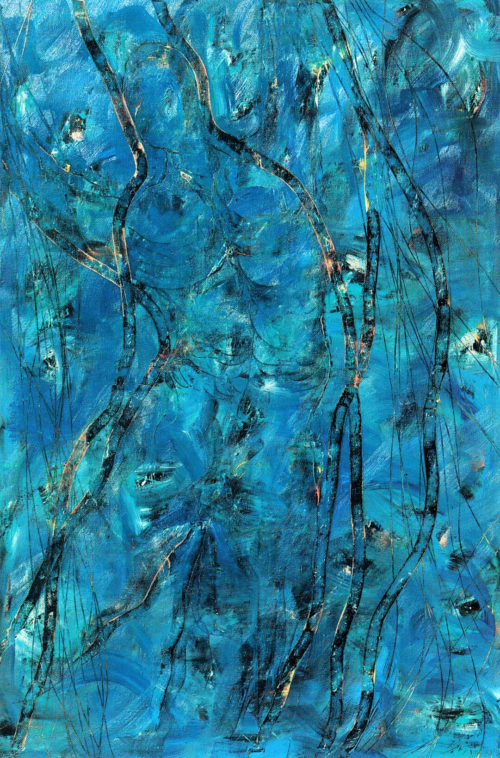