To this day, the orangery in the world-famous Schwetzingen Palace Gardens still serves as the winter residence for sun-loving Mediterranean plants sensitive to frost, including fig and citrus trees, especially orange trees, which gave name to this Baroque architecture in the 18th century. Back then, almost every well-off feudal prince indulged in the luxury of having an orangery in his palaces and summer residences. The land of Arcadia was simply moved up a few degrees of latitude, in defiance of the central European climate. This genius loci has inspired several exhibitions by the Kunstverein Schwetzingen in the past and is now experiencing a revival through the paintings of the Mannheim artist Dietmar Brixy.

Even the title of the exhibition alludes to the location, generating pleasant anticipation of the ripe and juicy fruits of summer which are now – in the spring of 2010 – only just buds or blossoms. Dietmar Brixy, himself a passionate gardener with many citrus trees in his care, was looking forward to this project like almost no other, preparing it with great passion. He bought an annual pass to the gardens months in advance and found inspiration and ideas here which have now been realized in a large series of new paintings. In fact, Brixy created more works than the halls of the orangery have room for, allowing the Worms Kunstverein to exhibit his paintings in their more urban setting as well. 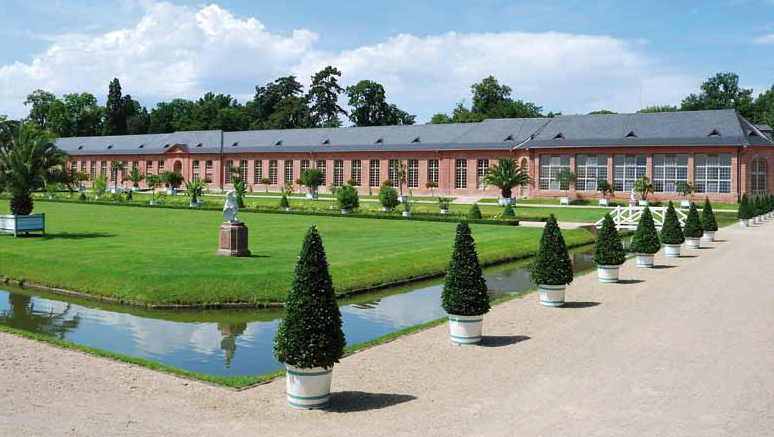 Colour itself is his primary subject

“Ripe and juicy” describes more than just the summer fruits that Brixy chose as the figurative theme of his likewise ripe and juicy painting. Brixy’s primary theme is the paint itself, which showcases itself in almost illicitly beautiful and sensual painting that balances between figuration and abstraction, taking form in an elaborate creative process, which I will briefly describe. In a first step, the artist creates an initial layer of paint, a wash of many colors, which he applies to the canvas using American action painting techniques. Once this layer dries, the second layer can follow. This layer is also applied in action painting style, but is more controlled and gestural. The artist spreads the pasty paint not so much with brushes, but rather with painting knives, spatulas, and his hands. However, the first layer is not completely covered over, but rather scratched free, enriching the pasty coloration with myriad pointillist nuances.

This spatula technique is primarily reminiscent of the abstract works of Gerhard Richter in a style his master, Karl Otto Götz, anticipated in black and white. Spreading several different paints together with painting knives, spatulas and hand brooms creates streaky grooves. Apparent shadows created by the lighter and darker components thus create the illusion of plasticity. A wavy line painted in this manner no longer seems flat, but rather it writhes – thicker here, thinner there – spatially through the picture like the snake through the Garden of Eden.

However, in Dietmar Brixy’s paintings, these streaky snaky lines do not remain abstract as they did in Richter’s or Götz’s artworks, but are molded into an associative gestalt, interpretable as rivers or real snakes or flying dragons. If you want to, you can also see meteorological or geological formations. The mind is free. In addition, horizontal passages are added, giving the paintings landscape characteristics, with a horizon, land, and a mostly high and open sky. The painting thus breaks free of the two dimensionality of the canvas, opening a third dimension for the eye and channeling it into a realm of color which no observer can evade. 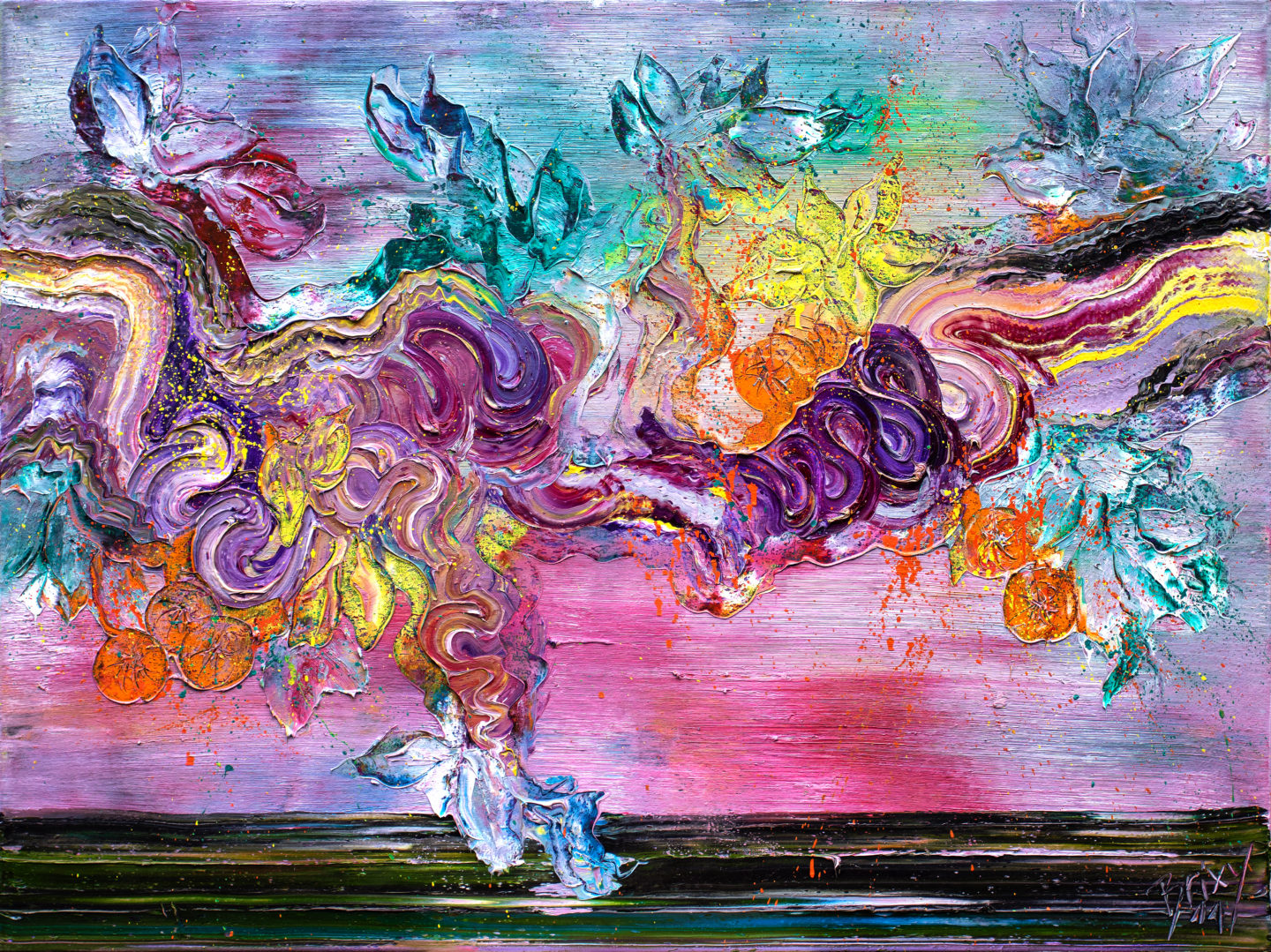 All in all, this creates a multi-layered, relief-like surface

In older series, Brixy shaped his gestures into gnarled branches of grape vines olive trees, likewise placing them in front of horizontal structure to evoke vineyards or olive groves. In other series he conjured ginkgo trees or bamboo grass to create a nearly ornamental aesthetic with Japanese overtones so loved by Van Gogh or in the Art Nouveau style at the end of the 19th century. In the “Ripe & Juicy” series, fig, lemon and orange trees are recognizable by the fruits they bear and their characteristic leaves.

Dietmar Brixy collected some of these leaves in the Schwetzingen Palace Gardens, imprinting them onto the still damp oil paints, a technique familiar since Max Ernst. To this, Brixy adds additional paint applications and sprays reminiscent of the dripping technique also invented by Max Ernst and popularized by Jackson Pollock. All said and done, the result is a multi-layered relief surface with haptic quality presenting the ultimate in physical and visual colorfulness.

As for iconography, Brixy desires more than to release and channel his feelings in his paintings. He strives to create not only sensuality, but also content. In 2007, the Kunstverein Schwetzingen held the exhibit “Orange–Fruit+Paint,” presenting research on the origin and meaning of citrus fruits. They learned that lemons have been cultivated in the Mediterranean region for about 1,000 years, but that oranges first arrived to Europe in the 16th century and only slowly spread here. Due to this delay, no symbolism at all could be developed around the orange in the extremely important art of the Middle Ages. It could not be interpreted as a fruit of paradise and crowd out the apple or the pomegranate because no one knew about it. The orange also arrived on the scene too late for early Renaissance still life painting and was only occasionally represented in Dutch paintings from the 17th century. 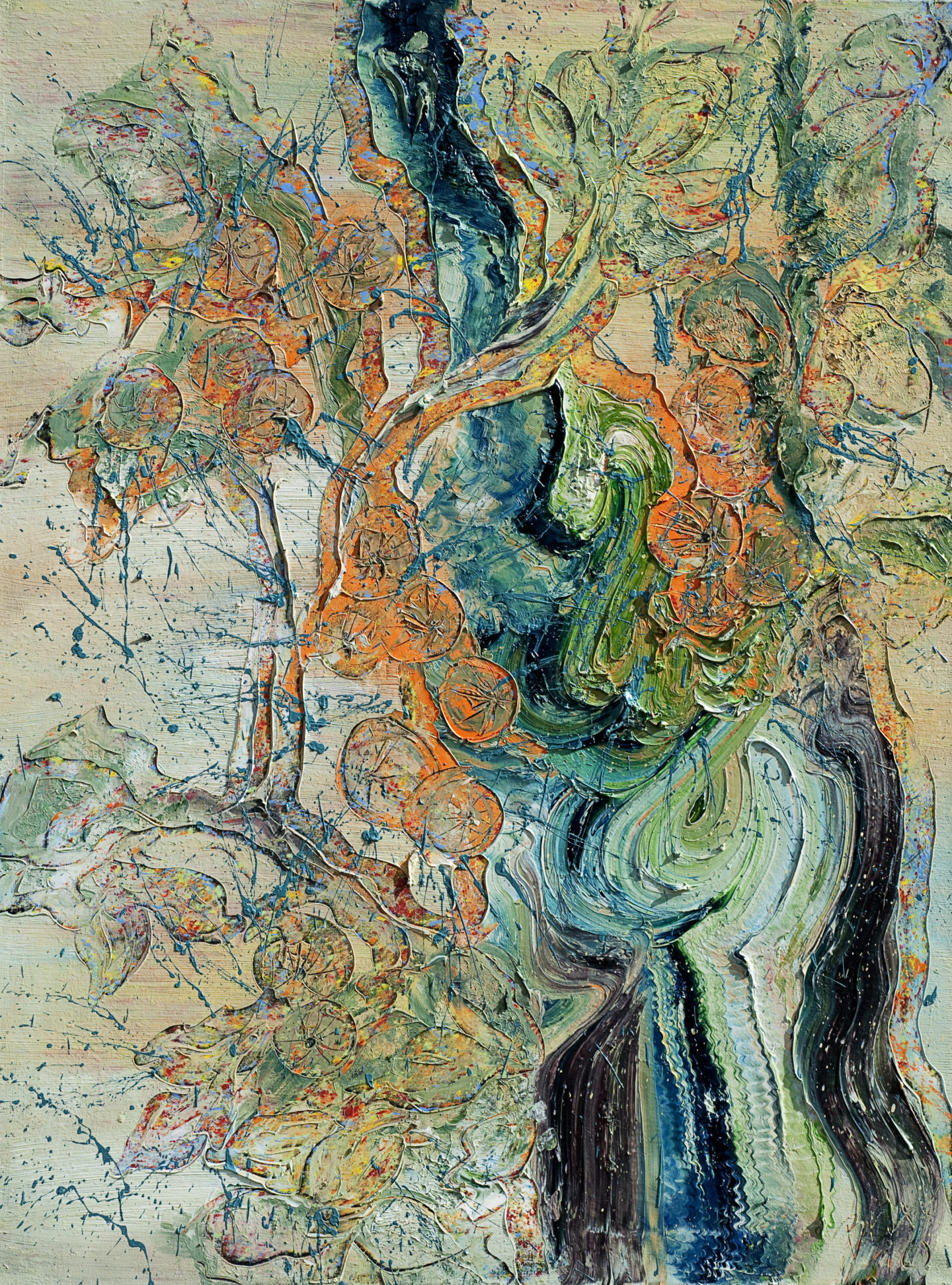 His new series is sunnier than painting before

The situation is different for the fig, which was already mentioned in the Bible, and which has been growing in Dietmar Brixy’s paintings longer, playing a symbolic role as an erotic fruit of paradise in his last big painting cycle, “Eden.” In contrast, citrus fruits are too young, from a cultural historical perspective, for interpretations of this type. At best, they can be experienced from a modern perspective as sensually sweet fruits, creating impact less through their form as through their color, conveying pure sunlight with a slightly exotic flair, seeing as the fruits are native to East Asia, where the colors yellow and orange have a much richer cultural-historical tradition and even a spiritual dimension.

With this in mind, Dietmar Brixy’s new paintings should not be viewed through a narrow symbolic, not to mention symbolistic, lens. His new series is sunnier than the earlier paintings. His ripe and juicy fruits should be viewed less as symbols than as motives that the genius loci cast into the horn of plenty of his artwork. Citrus fruits represent a Baroque culture of life and joy, which has quite accidentally yet very appropriately become native in Dietmar Brixy’s likewise heavily Baroque painting. The fruits have not always retained their original color, but rather are often expressively lavished with a wash of totally different colors. Sometimes they are only realistic contours of a thoroughly exotic fantasy fruit. 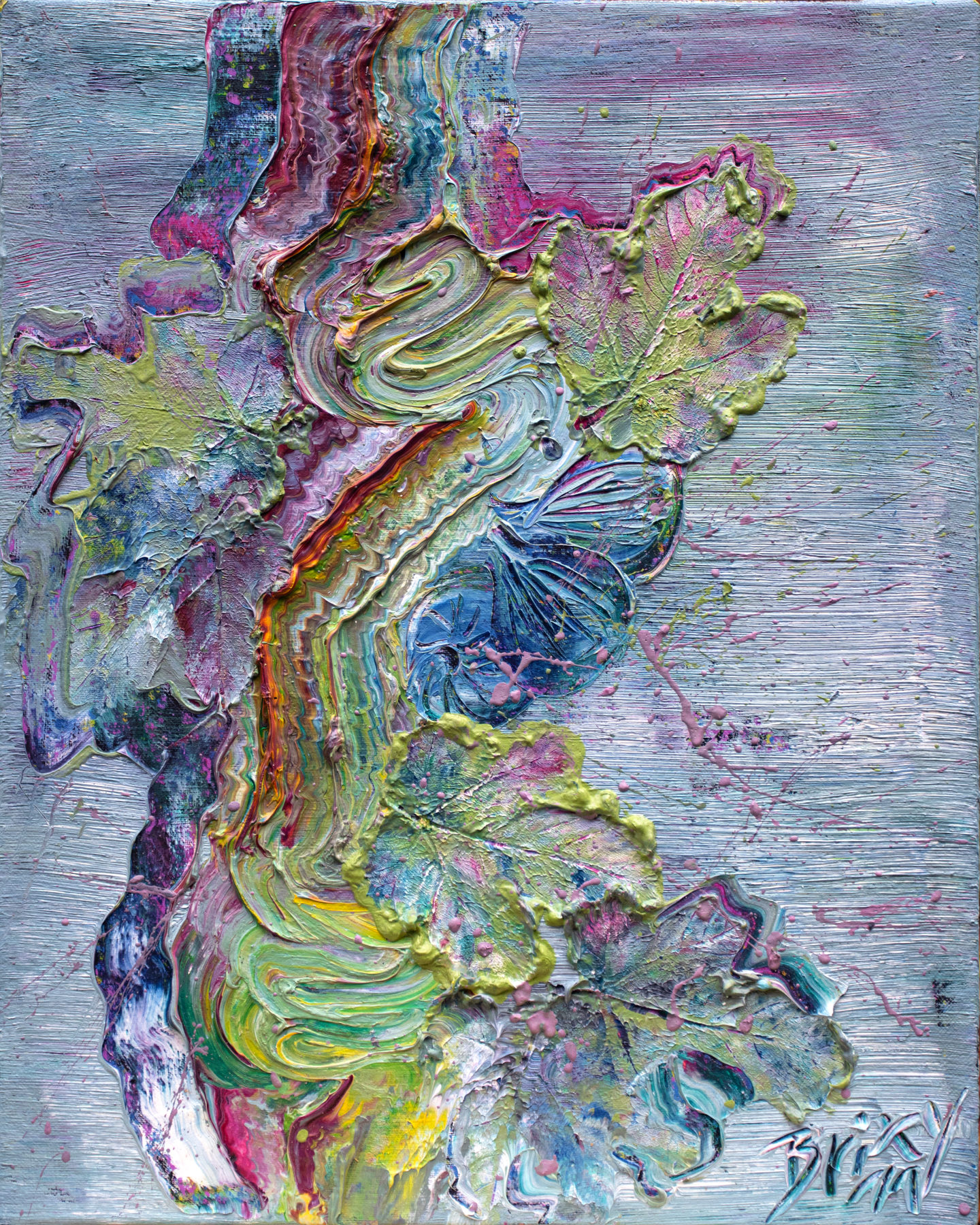 Dietmar Brixy lives his utopia in the here and now

The two impressively large paintings conceived specifically for the orangery at Schwetzingen Palace are even more fantastic. Towering six meters tall like abstract Michelangelo frescos, the paintings stand at both front ends of the 60 m long hall. Their subject matter, like once in Rome, is the end of the word. However, in this case they evoke the Baroque revelry in the park, a painted landscape shining at the end of a foreshortened tapered pergola, painted on a spherical wall and optically distanced by a dark frame, creating the illusion of a far-away fairytale landscape. Brixy has known this small gem since his childhood and has taken the opportunity to fantasize this dream image anew.

Both pictures reference the foreshortened suggestion of the pergola, but the grid dissolves into artistically snaking lines. In one of the two paintings, a small portrait of the original landscape is recognizable in the middle of the breathtaking painting, but it is no longer significant. The path to the goal, the paints that lead to the fixed point, are more important than the illusion of a distant desire. Applied to the aesthetic concept of the artist, that means that he is not striving for some kind of utopia through his art. Dietmar Brixy lives his utopia in the here and now, he lives his painting, his feelings, his paints. He loves life, loves art and nature, loves the Schwetzingen Palace Garden and all the beauty of this world. 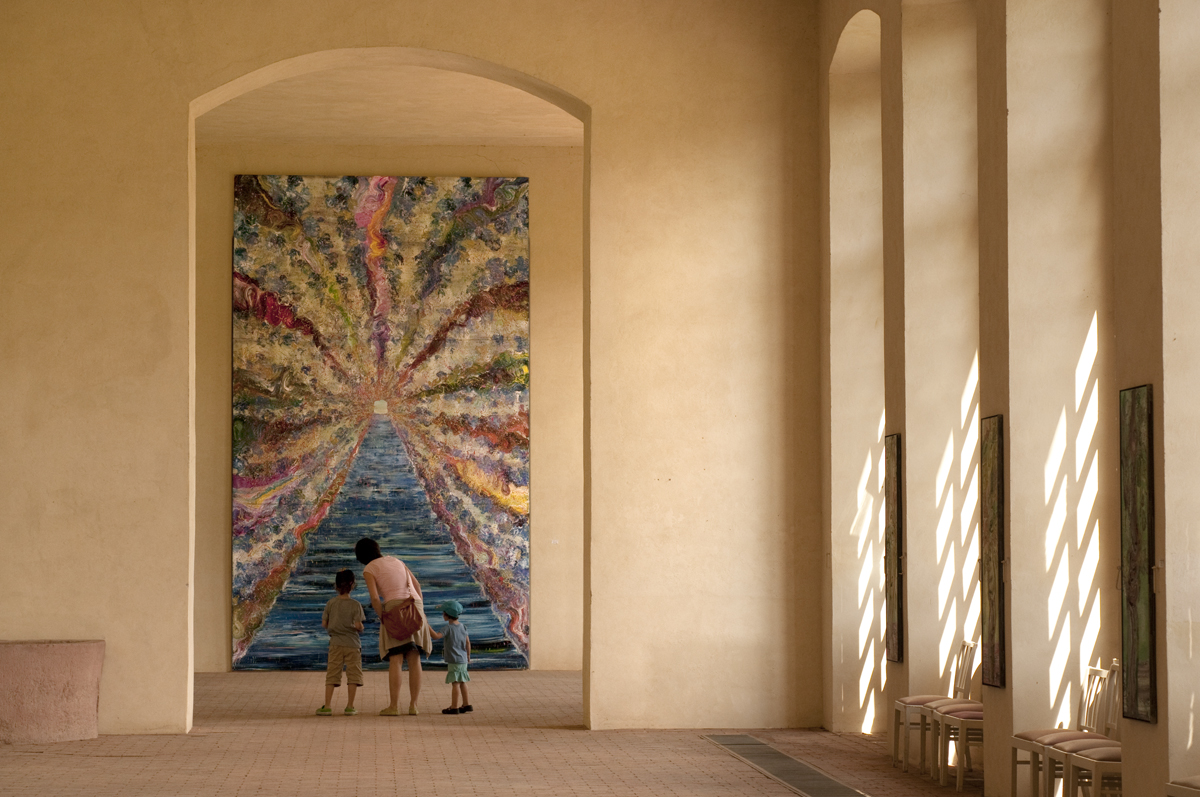 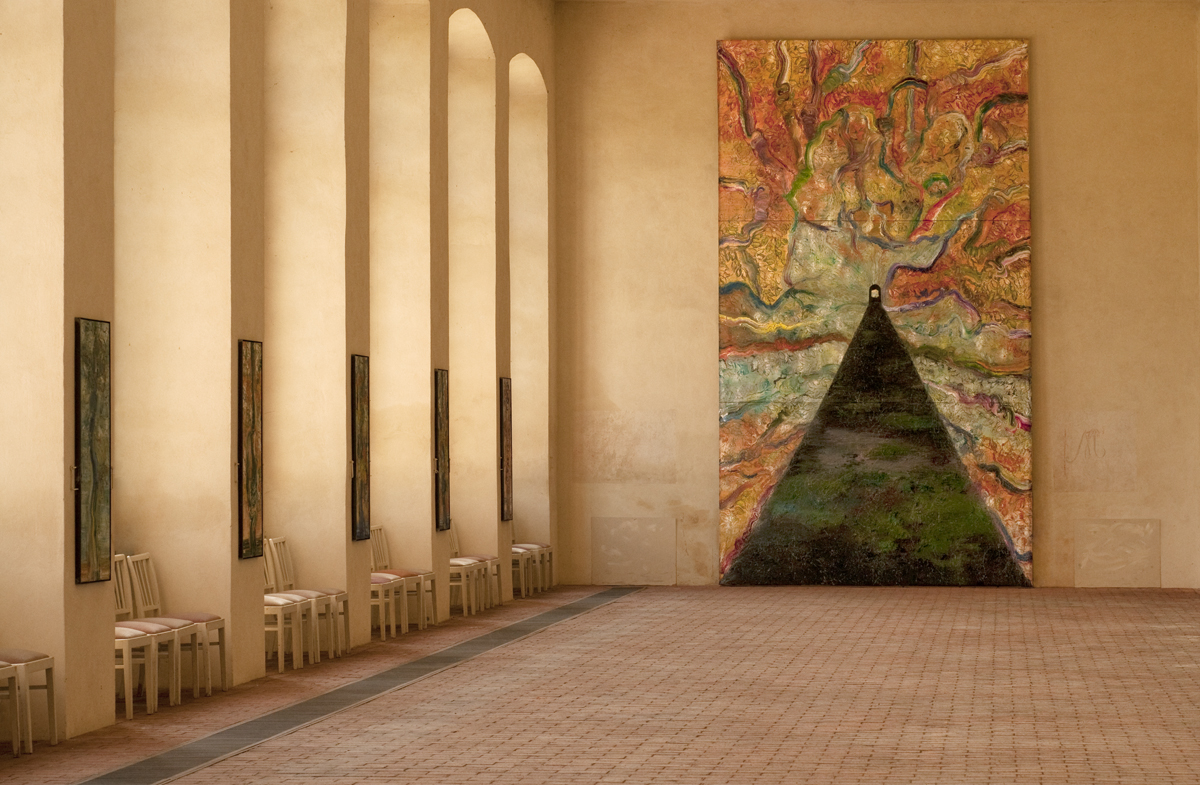 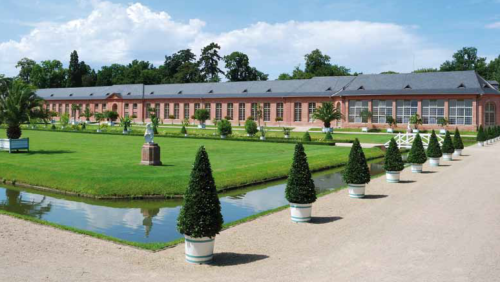 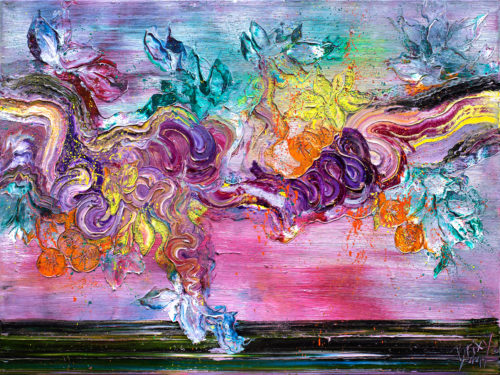 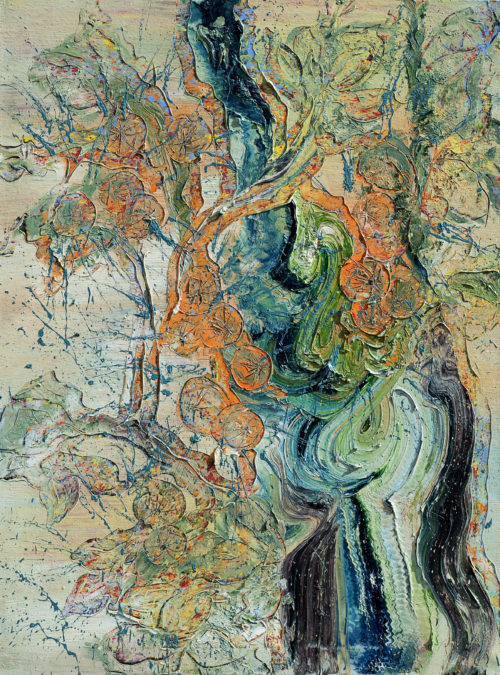 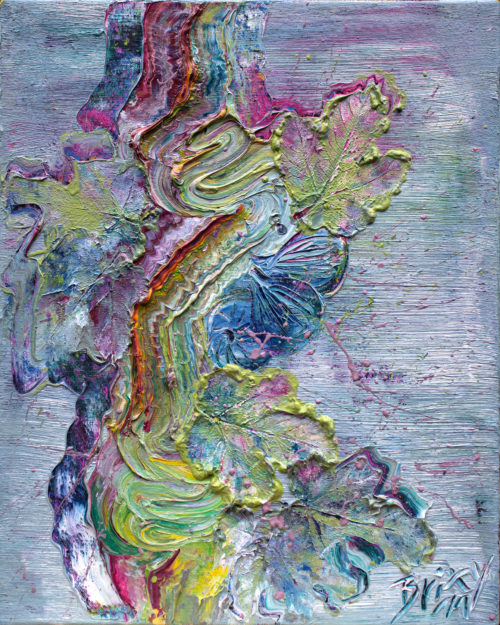 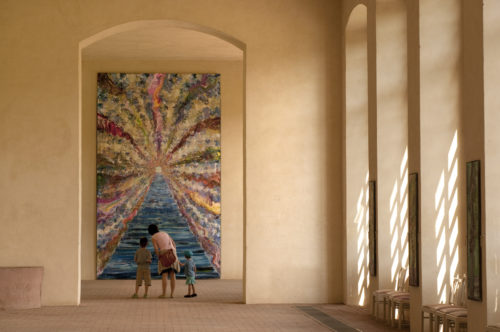 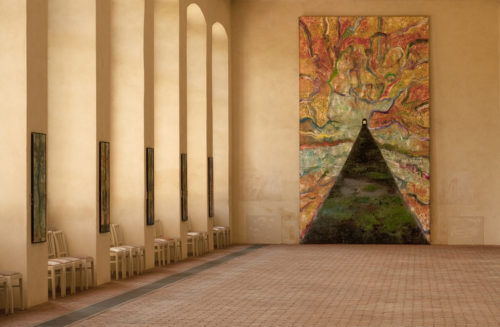