Located in Frankfurt's Westend, Galerie Barbara von Stechow is a gallery for contemporary art. The promotion of contemporary talent, both young and established, from German-speaking countries as well as an intensive engagement with the work of renowned American artists form the focal points of the gallery's programme. Through regular participation in various art fairs in Germany and abroad, the Barbara von Stechow Gallery has an international clientele and a wide range of contacts in the widespread international art scene.

Founded back in 1995, the Barbara von Stechow Gallery is located in Frankfurt's beautiful Westend district. The owner and gallery owner Barbara von Stechow grew up in New York and first studied business administration at the European Business School, as well as art history and history at the Johann-Wolfgang-Goethe University in Frankfurt am Main. Before Barbara von Stechow turned to her work as an independent gallery owner, she was the successful managing director of the Galerie am Schweizer Platz. A short time later, inspired by her father's collecting activities, she founded the Barbara von Stechow Gallery in Frankfurt's Feldbergstraße. Since then, the owner and gallery owner has been presenting and promoting internationally established artists as well as up-and-coming talents from the local art scene. Through changing exhibitions of various painting and sculpture positions in the generous gallery spaces, as well as at various art fairs in Germany and abroad, such as in Karlsruhe, Zurich and Miami, the gallery makes statements in terms of representational and abstract contemporary art.

Barbara von Stechow's passion is to bring people together, to inspire them with contemporary painting, sculpture and photography and to introduce them to the subject of art. The mother of four sons and partner of the operator of the Hattenheim Kronenschlößchen, Hans Burkhardt Ullrich, has been a member of the board of the State Association of Galleries in Hesse and Rhineland-Palatinate since 2002 and President of the Union International Club since 2014.

Vision of the gallery

With the opening of her gallery, Barbara von Stechow pursued the goal of promoting both young and established contemporary talents from German-speaking countries, in addition to already renowned American artists. In doing so, the Frankfurt-based gallery owner always focuses on graduates of the surrounding art academies, such as the Städelschule and the Hochschule für Gestaltung in Offenbach. The focal points of the monthly changing gallery programme are the exclusive representation of renowned American artists in the European region, such as Joe Stefanelli and Hunt Slonem, in combination with emerging artists from Germany, such as Dietmar Brixy.

This is what gallery owner Barbara von Stechow says about Brixy

Born in Mannheim in 1961, Dietmar Brixy studied painting and sculpture at the Academy of Fine Arts in Karlsruhe from 1985 to 1991. As an established and recognised artist, he has long been an integral part of the national and international art scene and can be seen at fairs and in galleries all over the world.

It is the inexhaustible spectrum of colours that the artist brings to bear in his works and thus always creates new impressions and associations. Using the so-called drip method, the paint is sprayed or dribbled onto the canvas on an initially black primed picture surface. Brixy takes the symbioses of colour and form produced by chance as the starting point for the visualisation of his increasingly clear ideas.

Layer by layer and always in direct contact with his work, he applies the paint paste-like with his hands, brush or palette knife and thus slowly creates a connection between the already created pictorial elements. Not infrequently, organic and even floral forms can be discerned. He creates these, among other things, by imprinting leaves and blossoms, thus setting a clear accent to his otherwise very dynamic and flowing way of working. The structures, which are not only strongly emphasised in colour, but also the sculpturally and haptically striking motifs, thus speak to the viewer through the medium of the picture. The expressive colour language of the paintings emphasises the softly flowing lines in detail and unintentionally allows them to become the compositional structure of the picture. 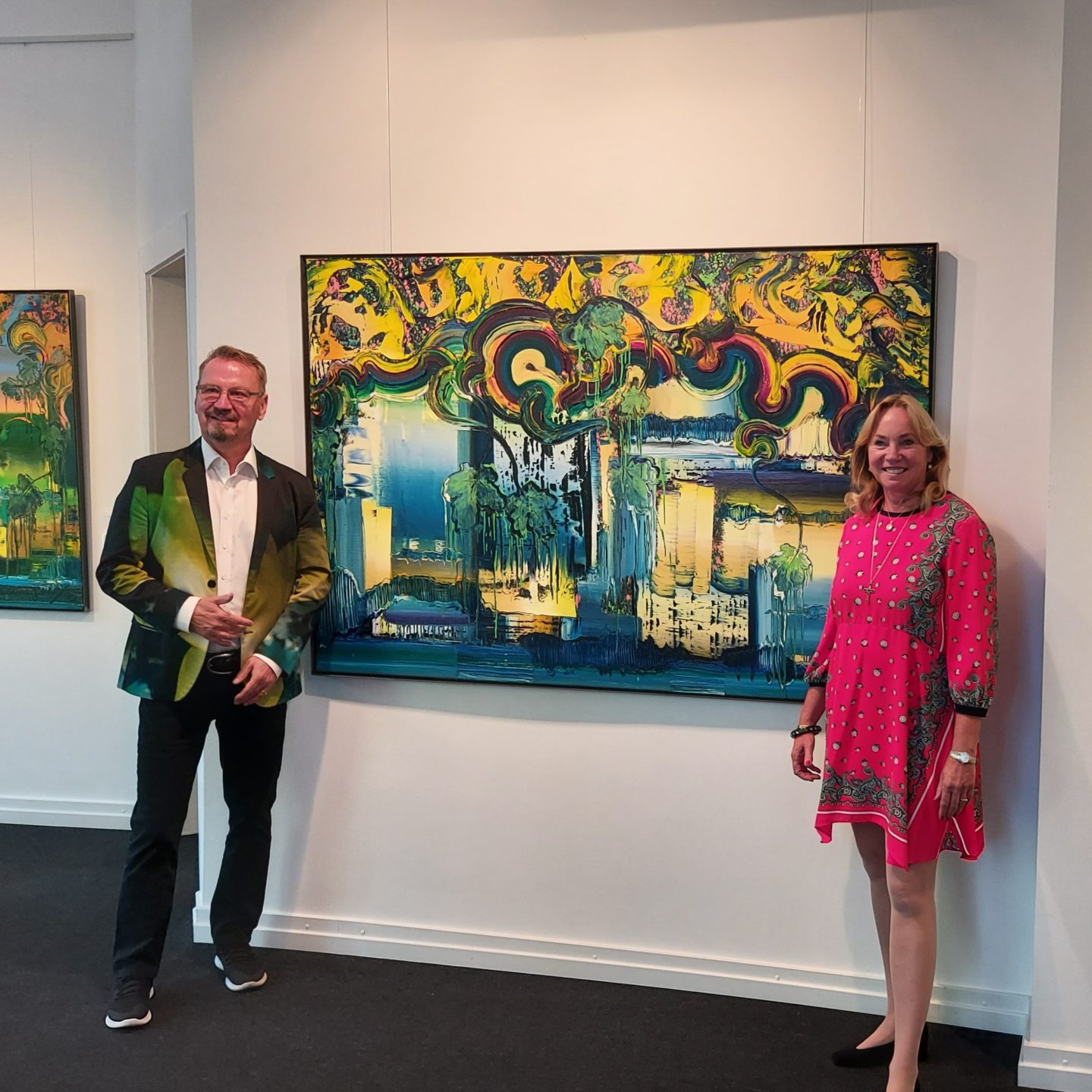 See the Gallery Tour of the exhibition "Splashing Colours" here. 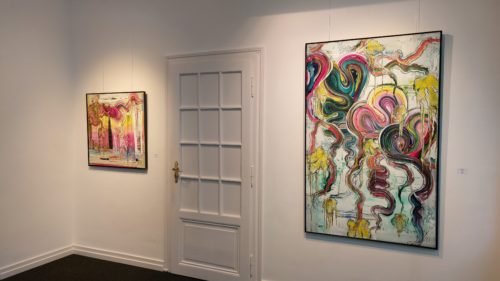 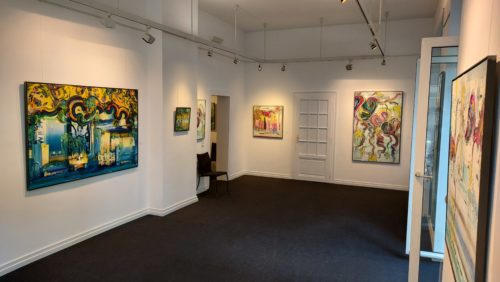 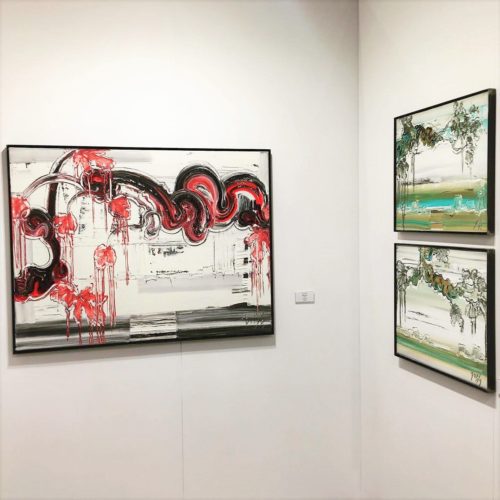 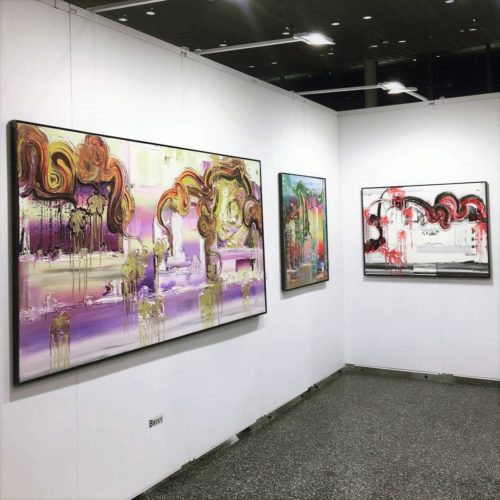 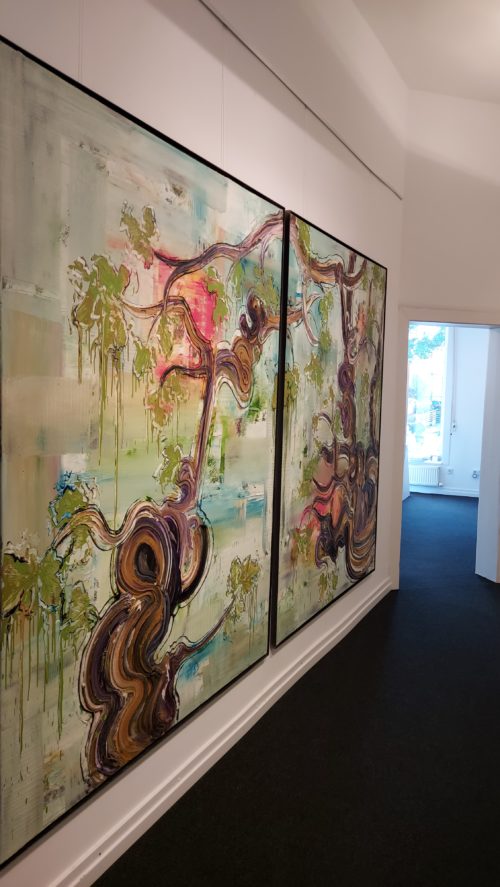 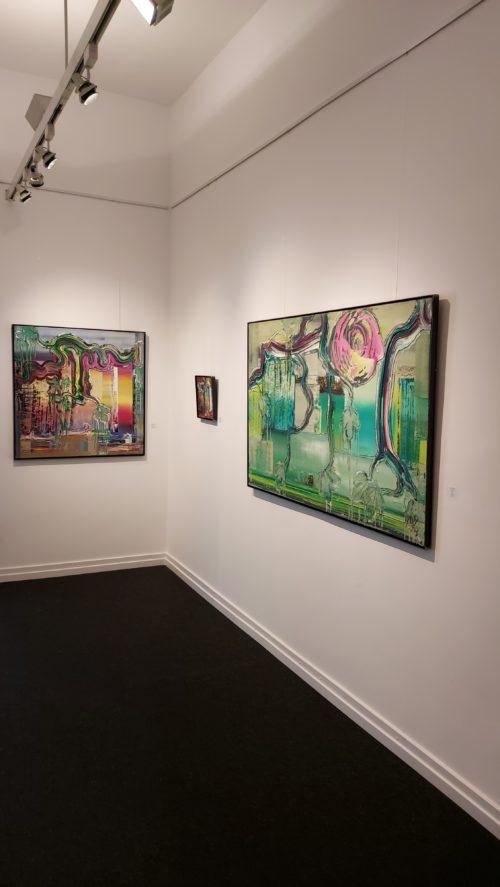 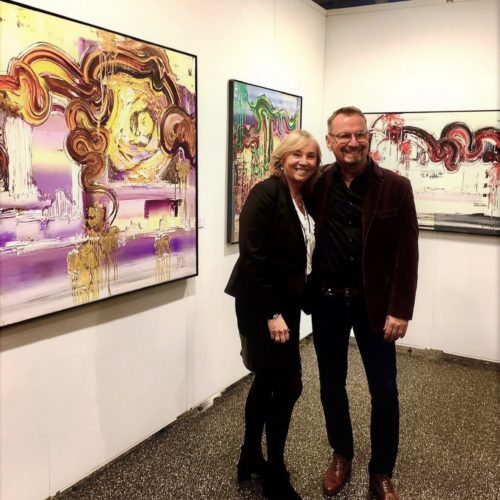 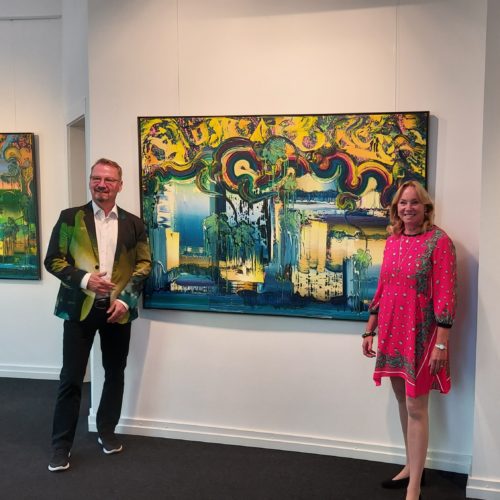